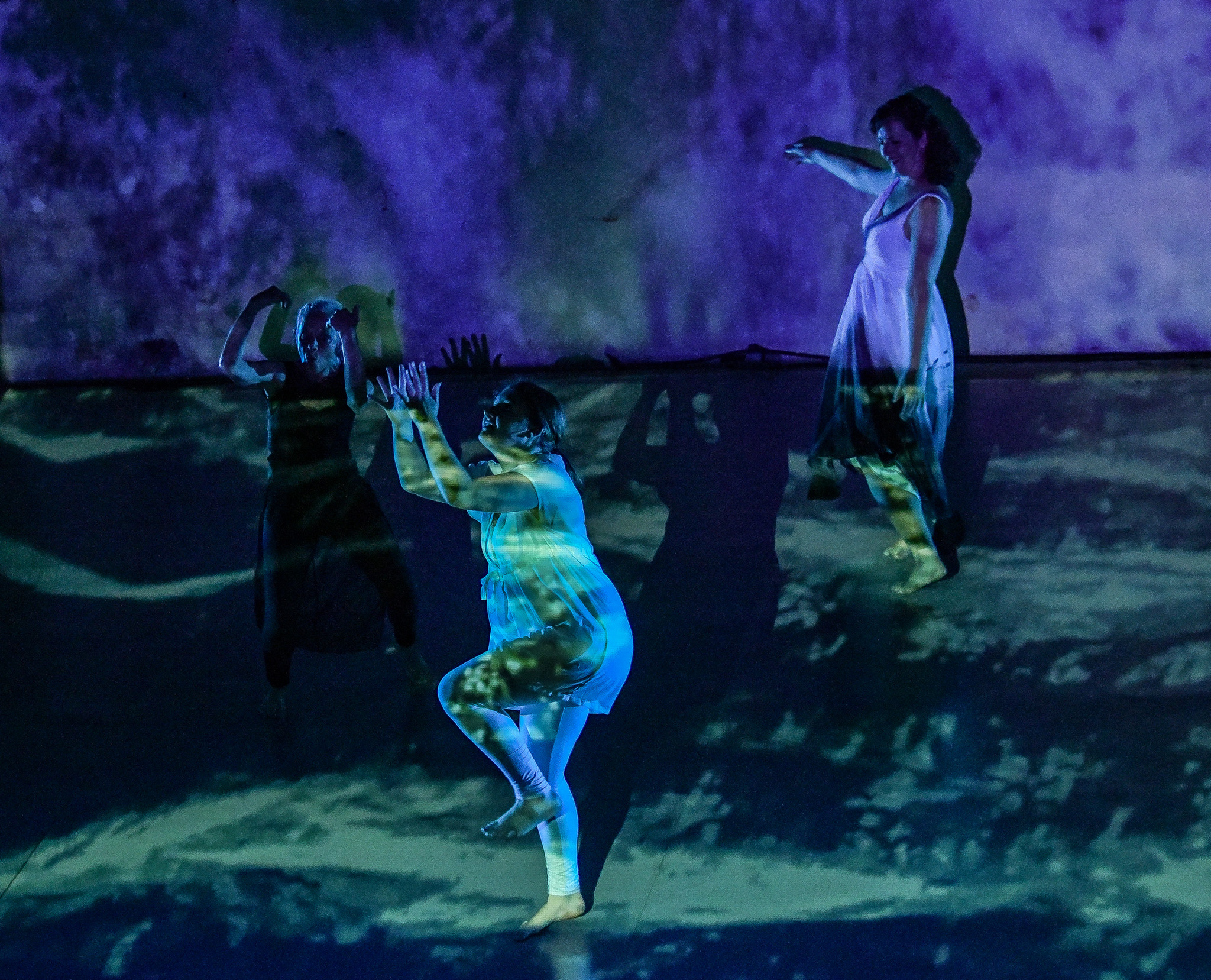 All Photographs in this post are ©2019 by Richard Finkelstein.

We began our load-in at 3:30 pm for an 8:30 pm show. We had brought three projectors from the states, a CPU for the Watchout system, two laptops, an infrared camera, a microphone, a router to create our local computer network, and lots of cables and power adapters. We spent about two hours installing the equipment. This included laying the dance floor, mounting projectors, setting up the computer systems, focusing the lights, mapping the projectors, and more. We did a complete run-through of the show. The performers made some adjustments for the venue, and I adapted the media to accommodate some specifics of the space.

The original production back in 2016 included a very isometric looking set with walls, a ceiling, and geometrically distorted cubes. The media was mapped onto all of this. For this production, we abandoned all physical scenery and capitalized on the cement ceiling and back wall of the venue itself. The cement was not pure white like a screen. Stains and cracks and vents were present. This provided a tactile grunge to the performance that we all agreed was fitting and supportive.

It is important in this show that the performance space be very clearly defined. Without the original set, I created a sharply masked area with a shape the mimics the venue. A hot, glowing edge defined the shape of the space precisely.

The first five minutes or so of the show happen in complete darkness. The technology of the show seems to fail, and the venue is thrown into darkness. Water begins to drip. This turns into rain and flowing water. Among steam and smoke, Sydney Moquin’s character slowly and awkwardly becomes animated.

This is a show about a world that is constantly changing. Out of the smoke and steam, a flowing stream appears. At first, it is painfully hot. As it cools down, it becomes a focus of amusement and wonder.

The character of the Brilliant Being associates often with water and play. She explores the flowing water and hops around on the rocks with the tinkling music.

The rolling fog and smoke abruptly clears, revealing rolling clouds in the sky. She climbs to a very high place, and finds herself both in and above the clouds.

Wonder continues to be the dominant emotion, until, abruptly, she is falling. Wonder turns into terror.

She tumbles to the floor, and rolls to the downstage edge of the performance space. She lies on her side so that she is facing the upstage wall. She is now centered under a hanging infrared camera.

We capture her image in infrared from above, and place it among layers of moving stars. She can see her own image from the floor, and slowly flails her arms and legs as she falls through the heavens.

She crashes on the earth, where we shatter her into atoms that swirl about as she attempts to reform herself.

This media is interactive. The images immediately below show some of these moments. The cloud of particles are controlled by me at one of the laptops. Sidney and I are performing something like a duet together. She struggles to control the particles together while they assail her. Several times, she draws them into an energetic bundle that she then disperses away from herself.

Frightened and weary, she collapses on the floor.

At this point in the show, we get our first, limited, encounter with the Voice Being. We do not see her, but we hear her, and we see the effect of her voice. A fluid mezzo-soprano voice sings notes without words from nearby. A line of liquid light like aurora borealis scintillates on the horizon, surging with the melody.

This effect is used throughout the show in conjunction with the Voice Being. Emily Jaworski is the performer. She wears a wireless microphone that transmits to one of the laptops. That computer generates visuals live in response to her vocals. These integrate with the other media in any given scene.

This venue is EXTREMELY resonate. We could not have asked for more beautiful acoustics for Emily Jaworski’s voice. We did not expect that effect, and it was a real treat.

The sound of the voice fades, and the Brilliant Being goes on to encounter frightening and abstract environments. A glowing white ring that causes pain surrounds her until she learns to push it back and dispel it. A nebula of hot electric lines that respond to ambient noise swarm over her. Twinkling sparks that pulse with the music swarm around her as she dances to avoid them.

The Voice Being is a gentle, caring, and maternal element. The scene builds to a moment of bonding and family and love; a much-needed break, after a long sequence of fear and danger. Like everything in our world, though, this moment cannot last.

The music signals the peril first. A swirling vortex appears under the ground beneath them. They are pulled by it, struggling and crying, as they are swept away.

The media does a stately crossfade into an entirely alien realm. Slowly moving blue fog is overlaid with a rigid white grid pattern. Staccato notes of a plucked string instrument accompany Lisa Travis’ entrance as The Other. She moves like a spider, with precision, with a plan. She seems to be alone in her own world, with orderly lines. She moves with the music, alone, for several minutes. Abruptly, two musical intrusions violate the scene, one after the other. The perfect grid distorts and rips, as first the Voice Being (Emily), and then the Brilliant Being (Sydney), are expelled into this realm.

Defensive and hostile, the Other reacts to these foreigners with aggression, especially Sydney as the Brilliant Being. The Voice Being reaches a limit, and shouts out a single, long, musical note that rips the grid wide open. She confronts The Other, standing in open void-space among torn grid lines, eye-to-eye across the rolled edge of this reality,

She keeps the Other at a distance as she cares for the Brilliant Being. The Other watches, maneuvering to get closer without leaving her own space.

This is interactive media. Like the swarming atoms earlier, I am controlling this as a fourth member of the dance composition. This is original code that I wrote that is creating the grid. I can expand, contract, and move the gaps in the grid to react to anything that the performers do, or in return, to prompt them in some way.

One of the most memorable music passages composed by Jonathan Santore marks this turning point. The characters make clear, deliberate choices to reach across the boundaries to each other. Like the rest of the show, the moment is abstract, but the courage demonstrated is unambiguous. They explore each other’s realities and find peace together.

They all sleep. The grid fades. Tinkling chimes in the music bring us into a world of water. The Brilliant Being wakes up first. She makes ripples in the water with her hands, and then skips around, leaving expanding rings every place she jumps or splashes.

This is, again, interactive media. She and I are performing a duet. There is a tiny blue dot that I place within reach of her. She touches it, or jumps on it, in time with the musical notes. As she makes contact, I activate the ripples. Together, the effect is compelling and beautiful.

The other characters wake up, and join her in the water play. The musical grows, become more grand and orchestral. The space becomes waterfalls pouring into a pool or lagoon with massive waves. They all play and dance in the water for a lengthy scene. As they wind down and fall back asleep, they do not acknowledge that the water is drying up and disappearing.

The music becomes threatening. Lightning fills a red cloudy sky as everyone wakes up in a panic. A lengthy sequence begins: the three characters verses the sky. They bring tree branches together and weave them, step-by-step, into a shelter.

They fight to repair it as it is blown apart by lightning. Finally, the floor of the shelter is destroyed, and the vortex returns. The Voice Being is dragged away, screaming.

The remaining two characters perform a duet sequence that beautifully conveys their grief and loss. They revisit musical and movement passages from through the show so far, trying to find a purpose and a direction together.

And suddenly, they hear the Voice Being. We do not know where she actually is, but the light of her voice illuminates the sky.

For this performance, Emily Jaworski exited behind the audience, climbed the stairs, and sang this sequence from the mezzanine level.

The final moment in the show is a decision. The world so far has been a constantly changing environment, but always within strict boundaries on the stage. Together, they make the choice to step across those boundaries, and exit the space together.