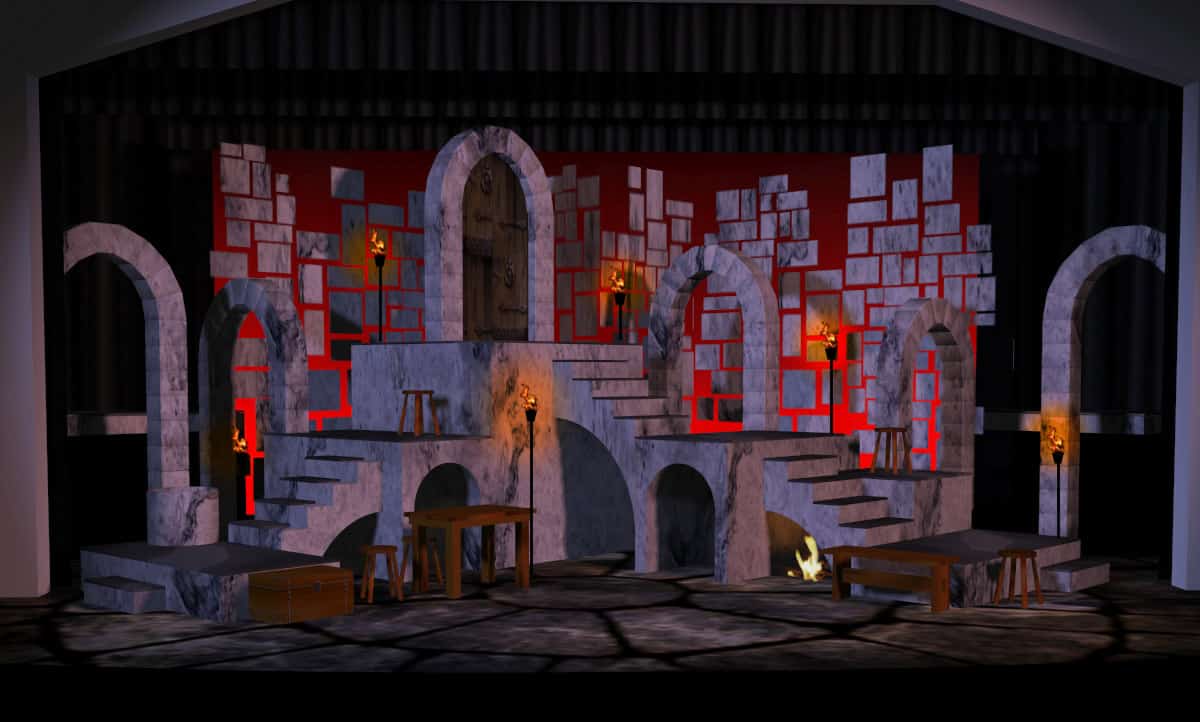 I’m looking back right now to a summer season I did in 2015. It was two shows: Pippin and Man Of La Mancha. They were running in rep together at Jean’s Playhouse in Lincoln, New Hampshire. The set had some minor adjustments between the two shows. My specific portfolio listings for each are available here: Pippin and Man of La Mancha.

Early in the process, I was looking at something like this. I wanted an elevated entrance up-center, with lots of stone, and an open flat area downstage. Both shows would be served by a lot of variety in the look, though, and this initial concept was pretty static visually. A cyclorama might be a nice addition, though I had also discussed using projections with the directors. The trick for projections would be where to put them. Full stage cyclorama projections are little tired, and they make upstage entrances difficult.

Sometime in the year or so leading up to this design I had seen some photos of a design for Sweet Charity by a friend, Richard Finklestein, at James Madison University. That design was quite different than this one – but it had an innovation in it that I remembered quite specifically. Richard’s design included rectangular patterns, suspended in the air with opera netting. He had covered them with some kind of textured gold foil. I had seen Richard at USITT and told him I might steal that device at some point. He gave his full blessing. I decided to make this the show to try out that trick.

I replaced the walls in my preliminary design with floating arrangements of flat stone rectangles. I included some stone arches for entrances, a good number of levels and stairs, and behind it all, a cyclorama. I worked out how I could hit these floating bricks without hitting the cyclorama. By angling the walls, I could shoot laterally across the stage, hitting the bricks and sending the overcast projection light into the wings.

The bricks could be lit with normal stage light and read as stone. The cyc could be lit behind it all in any color. With these choices, we had an enormous range of possibilities visually, without having to move or fly anything. Pippin jumps wildly from setting to setting. Man of La Mancha includes a great many story-telling flashbacks to fantastic places. Each musical would be well-served by low-effort versatility in tech.

Getting these blocks to fly was a stagecraft problem. Kyle Trumble was the technical director for this production. Our budget did not allow us to consider opera netting. Instead, we fell back on a product called deer netting. Deer netting comes in rolls about ten feet wide, maybe one hundred feet long. It’s a plastic/acrylic sort of material, woven in a wide grid, sort of like a volleyball net.

To help things along a bit in the shop, I created a planned inventory of flat luan blocks with specific sizes. I arranged them in a front elevation (below). Kyle and his crew were able to cut them all quickly, leaving more time for the work of attaching them to the deer-netting.

Real opera-netting is made of cotton or similar soft weave materials. Deer netting (and bird netting) are made from synthetic materials. It is hard to get glue to stick to these. In the past, I have attached muslin to these materials by sandwiching the netting between two layers of fabric, glued together with white glue. For this process, Kyle used some hot glue, some tape, and sometimes sandwiched the netting using a backing block. He took his time doing this, and got them to hang very neatly and very closely matching the design.

The projectors ended up a little further downstage than originally planned. They ended up spilling onto the cyclorama a little SL and SR. I made a custom digital mask for each projector that was overlaid on top of all media.