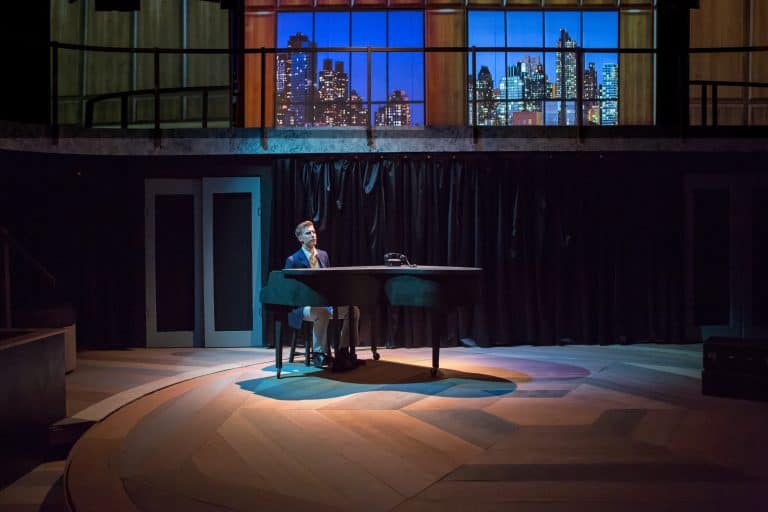 Theatre is story telling. It is vital that the audience understand the words that are spoken or sung by performers. Words advance the action. When there is also an orchestra, sound gets complicated.

Microphones help, but there is deep magic for mixing a stage full of lavaliere microphones against an orchestra. Many theatres are intimate. Amplified sound comes out of ceiling speakers and goes right back into the lavaliere mics. Small theatres live under the constant threat of audio feedback. You can only turn those mics up so much before it’s too much.

Loud acoustic instruments add to the trouble. A piano is a good example. Pianos don’t need to be amplified. They’re nice and loud already. We find ways to muffle them. We sometimes pad the back of the piano with furniture blankets and find other ways to tame it, especially if we cannot boost the actors’ voices as loud as we might wish.

Electric instruments are easier to balance. We can set them at exactly the level we want, at any moment in the show. There are some excellent electric pianos with weighted keys that professional pianists are generally happy to play.

The down side of electric pianos is that they are not as charming as real ones. If the orchestra is hidden or off to the side, this is not an issue. There are shows, though, in which a functioning piano is a part of the set.

I designed a production of A New Brain in 2002 that had a baby grand on stage as a set prop. I recycled that piano design for Forever Plaid in 2008. Each of these used a fake baby grand piano. The design was a hollow piano with an electric keyboard and a speaker inside. This was for a different company, so it was built a second time.

A keyboard, a speaker, a power strip, and a bunch of cords were placed inside this prop. This early incarnation of the piano didn’t move. The AC power cords ran down one leg and off stage.

In the fall of 2017, I designed the scenery and projections for Merrily We Roll Along. This is a musical about the lives of a writer/composer team who produce Broadway Musicals. It is fast-paced with lots of settings, and it has the charming device of having every scene happen earlier in time than the previous.

The set included an ornate revolve center stage. It’s purpose was to support movement and dance rather than to change scenery. It fit well conceptually with the emphasis on time in the show. It felt like clock works regularly turning among the action of the show.

Piano playing is important in this show. The characters play piano a lot. Their careers are revealed in reverse-chronology. In our production, we moved from baby-grands to uprights, with the pianos getting a little worse-looking as we moved back in time.

The design included two piano shells. One was a baby grand, the other was an upright. Each had to be playable. Most importantly, each had to be light enough to be easily lifted and moved backstage, and had to roll effortlessly out onto the revolve at need.

Piano shells were a pretty clear choice – but this time, they had to be wireless. We included foot-pedals this time, too. Inside the pianos was a good monitor that fit, the keyboard itself, all of the cords, and a portable AC power source. We started the show with the baby grand, and switched to the upright at intermission. We transferred all of the electronics from one shell to the other.

I don’t have the specs for the specific power source we used, but the thing pictured here would do the job nicely. A lot of portable AC power banks have come onto the market in recent years. The one pictured here is on Amazon for about $189. It puts out up to 300 watts. I carry a smaller one in my laptop bag that puts out about 120 watts. Check the voltage needs of your keyboard and speaker. These can be bought from anywhere from $89.00 to $300, depending on your power needs. Expect them to power your piano (or lamp post or fireplace or whatever) for as much as an hour reliably.

These pianos were almost absurdly easy to move around the stage, and they sounded terrific. We used a long flap of black fabric over the keyboard, so that it was easy to put the keyboard in and out – but there was no visible gap above that.

We used 1/8″ pressboard/masonite to follow the curve of the piano on the baby grand. There is a little bit of wiggle room in the height and width of a piano, but the sizes fall within a pretty standard range. You can cut the footprint for the baby grand out of a single sheet of plywood with plenty of wood to spare. I recommend gloss paint, or a good coat of gloss polyurethane over the final paint job.

Whether you put a power source inside and go wireless or not, this unit is an excellent stock piece of scenery to own. One of these I designed was built with removable legs. The company that owns it stored it (I think they still do), and use it routinely when they have an exposed orchestra. It lends a sense of occasion and formality to the pit.

Best of all, it never requires a piano tuner.