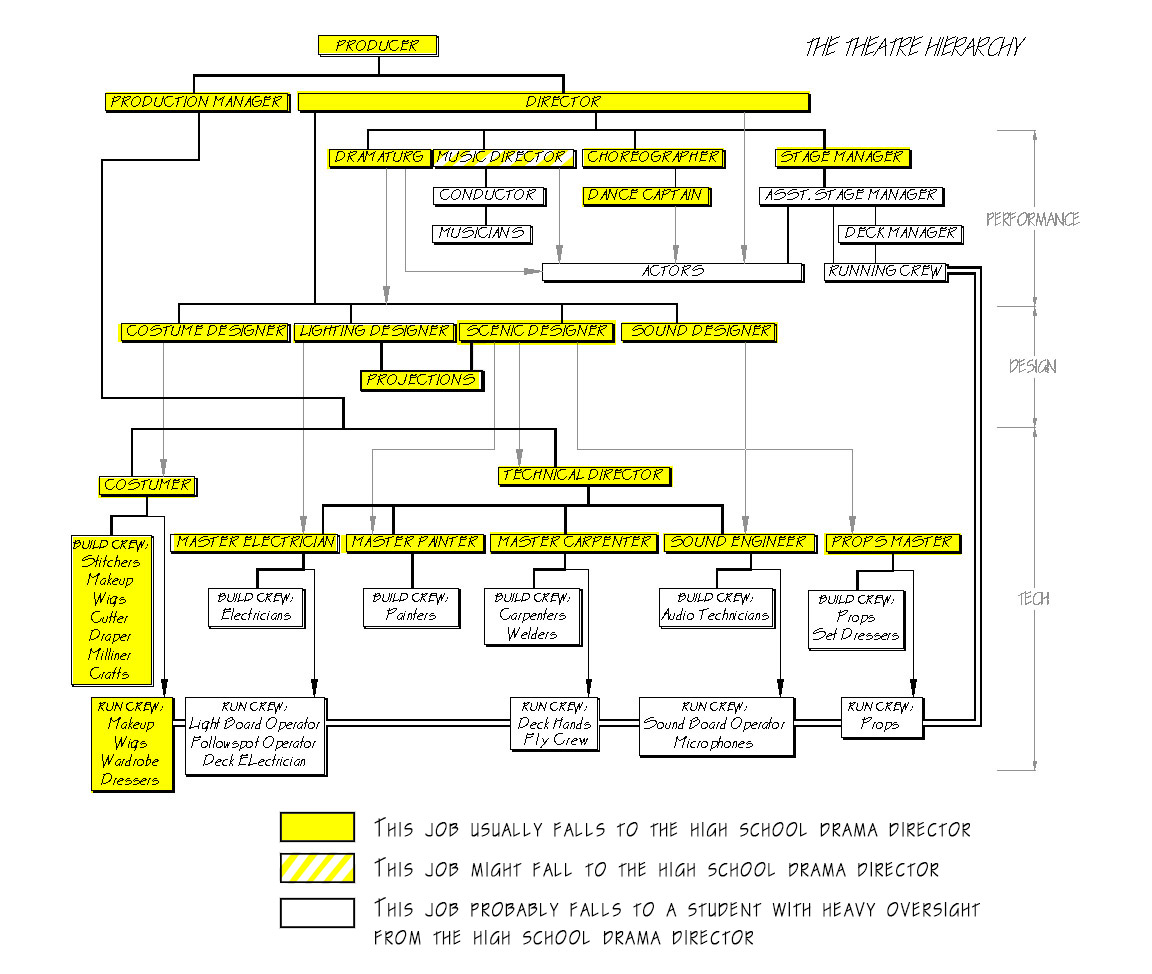 UPDATE: There is an updated version of this chart available here: https://scenicandlighting.com/article/theatre-hiearchy-chart-2021/

This is a theatre hierarchy chart that I made for a class in about 1999. I have used it for several classes since then.

In 2013, I contributed it to a open-education resource site, BroadwayEducators.com. It has gotten picked up by a lot of people since then. It comes up readily on Google for “theatre hierarchy.” I think it’s popular because it is not a pure hierarchy. It shows lines of communication rather than just who reports to who.

I recently found this blog entry from 2015 by Tom Cline at Oberlin College:

Mr. Cline color coded the chart to track what various people did for a children’s theatre company. I like this because it acknowledges a reality: individual people wear many hats in this business. Even so, we all tend to pay attention to which job we are speaking from at a given moment – if not, we should try to.

The color coding neatly adds an extra dimension to the chart . He has simply blacked out any position that this company does not use.

A small company could post this with a key. Individual names could correspond to colors. It gets confusing in some companies when inviduals do lots of jobs. Developing professionals sometimes get confused and think multiple jobs are the same.

For a brief second I might suggest this color-coding for use in a high school theatre. That’s where kids are learning what these jobs are for the very first time. It’s perfect! Until we color-code it.

Let’s label everything yellow that the H.S. Drama director probably does.

We host an annual theatre conference at our university. High schools from all over the state attend. Sometimes, in conversation, a high school director will say something apologetic or sheepish about the quality of the shows at their school.

If you are the running a theatre program in a high school, it is likely that you are the director, producer, technical director, set designer, costume designer, lighting designer, prop master, makeup designer, wardrobe supervisor, master carpenter, master painter, and sound engineer. You manage to mount a show using nothing but absolute beginners and a theatre space that may or may not double as a classroom, gymnasium, or assembly hall. You are probably working far beyond the hours on your contract.

Most of the time that I work on a show, we have an individual master electrician, director, costume designer, producer, sound engineer, and most of the rest of this.

I cannot say for certain that a show that my program puts up will look a little more impressive than your’s. I tell you what, though: if it doesn’t? Shame on us.