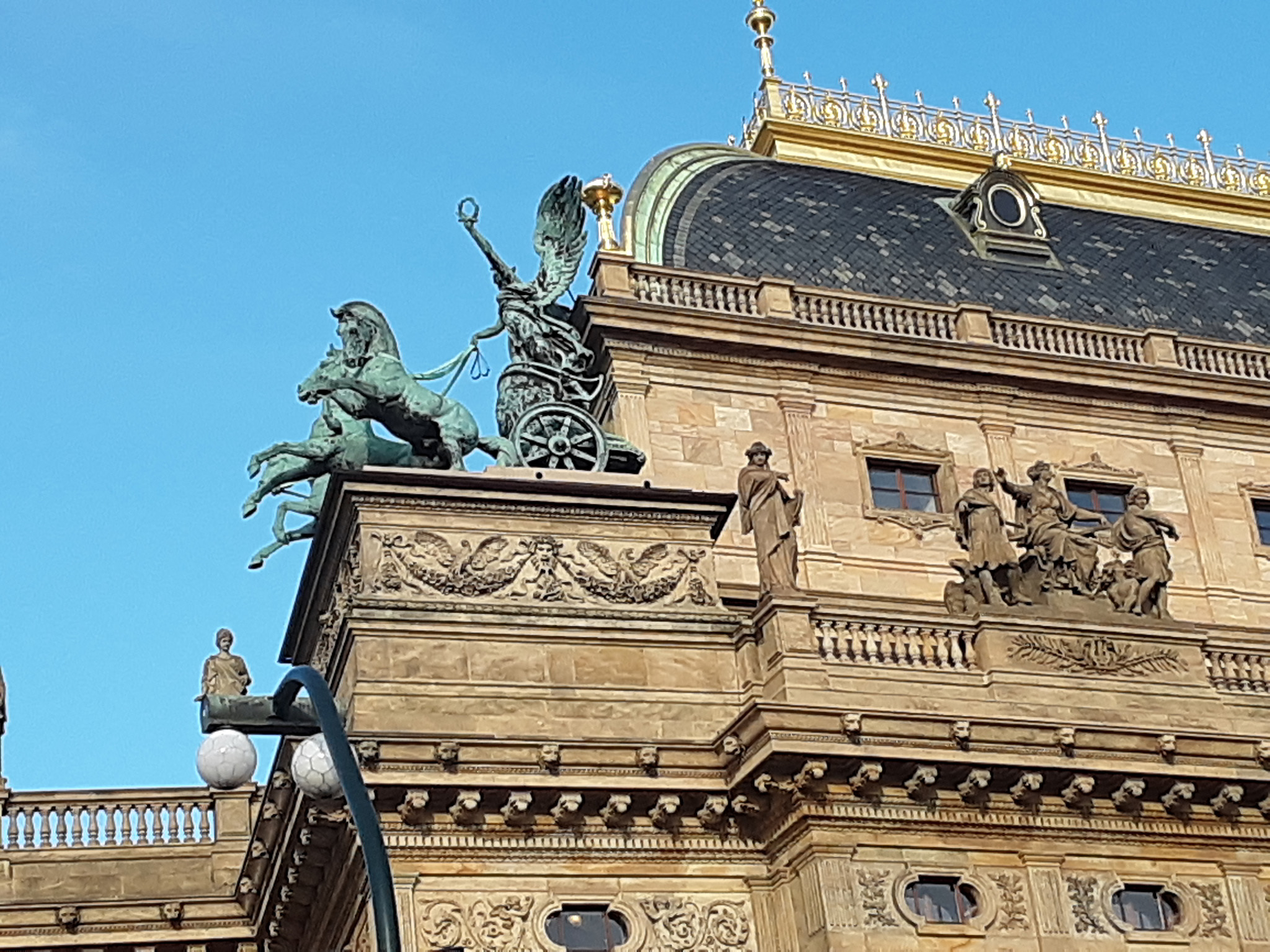 This is the National Theatre at Prague. It’s one of the symbols of national identity, and a big part of European culture. The National Theatre in Prague began as an idea in 1844. The city residents raised the money themselves to build it. The first cornerstone was laid in 1868. It was opened initially on June 11 in 1881. A fire devastated it that same summer, destroying the copper dome and the stage. A new collection started immediately, and forty seven days later, reconstruction was ready to go again. The people here hold art and culture pretty dearly. The National Theatre today has four performing arts companies. The Opera, Drama, Ballet and Laterna magika. There are four stages which include three historical buildings and the New Stage.

The Prague Quadrennial in 2019 is inspired by the sculpture visible at the top of the National Theatre, the Golden Triga. It illustrates three forces that come together to move the chariot of Nike, goddess of victory. The symbolism is that performance happens as an act of collaboration. When individuals combine their talents, they create something larger than any one person could working alone. The theme for the Prague Quadrennial this year explains that the three horses represent the three stages of human life: “youth’s wild instinct and intuition, the experience of adulthood, and the wisdom of age.” The PQ is applying these in 2019 as Imagination, Transformation, Memory.

I first learned about the Laterna magika when I was eighteen, just wading into scenography for the first time. “Magician’s Lantern” is generally considered to be the first multimedia theatre in the world. It was founded as part of the 1958 Brussels Expo, and kept going, They were pushing the boundaries of illusion and multimedia decades ahead of most of the world. Laterna magika blends genres, including dance, ballet, and mime, with black light theatre and other forms of multimedia. They embrace original works created just for the company, rather than ready-made, scripted pieces. One of the original, fundamental principals was the integration of film projection with live performance. This has evolved steadily into hybrids of newer technologies including digital projection.

The art and performing arts culture in Prague is as powerful and vibrant as those found in cities such as London or New York, but in what I can only describe as a much more accessible manner. In Prague, there is a common-man, whimsical quality about the arts. The culture feels less urgent, and less competitive than it might elsewhere.

I have pursued multimedia solutions for performance for about twenty-seven years. I have drawn inspiration from the Laterna magika for my own work because that company, more than any other, demonstrates that illusions and magic with light do not depend upon the technology that you have access to. They are not dependent upon how many pixels you have in your LED displays or upon the contrast ratio of your laser projectors. They depend only on what your vision is, and that you have enough passion for that vision to make it work using whatever tools you have on hand.

I have also worked in my community to raise support for the arts and performing arts for much of my adult life. I draw inspiration from the people of this part of the world as proof that human beings want art. It needs to be accessible, and it needs to speak to them, as an audience – not to someone else. Human beings want it every bit as much as they want football, motor speedways, restaurants, and bars. So long as it is accessible and delivers something that is important to them, they will find a way to make it happen.