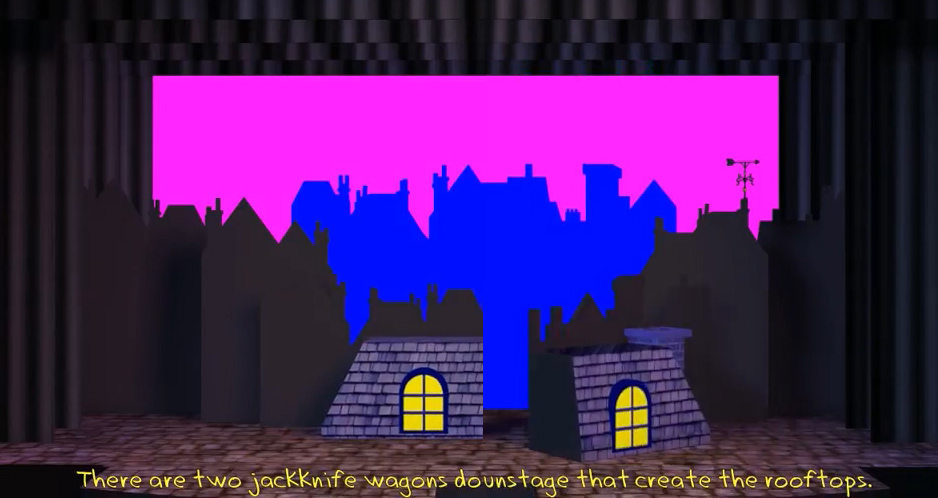 Set changes should look easy. The audience should never feel sympathy for the people moving things around on stage. It would be a rare show in which it would be appropriate to see running crew exerting themselves.

There are a lot of factors that will go into choosing the means by which scenery will move. A big one is the rhythm and sequence of the settings in the script. NIGHT-CLUB. KITCHEN. NIGHT-CLUB. PRISON. APARTMENT. BIG SCENE. SMALL SCENE. DANCE SCENE. SHORT SCENE. Listing the settings out and working out the patterns helps a lot in determining what kind of geometry might best serve a production.

Old wing-and-drop shows were written with scenery in mind. A big scene was followed by a little scene. A full-stage number with a drop in the back was followed by a small number played far downstage in front of a drop much closer to the audience. This allowed a set change to happen behind that drop, so the show could continue to the next scene without pausing.

Contemporary shows often do not have solutions built into the writing. Theatre types and stagecraft possibilities are so varied that writers do not concern themselves as much with these aspects as they once did. I tend to think about the sequence of settings in a show as a code that I need to crack.

There is an art to identifying in a show how how to deftly move from setting to setting. Knowing your director and working with them is as important as knowing the script.

When it is time to move furniture or other large set pieces, wagons and revolves often come into play. There is a really useful hybrid of wagon and revolve called a “jack knife wagon.” A jack knife wagon is typically pinned to the floor at one corner with some kind of pivot. It rotates into and out of position.

Usually the pivot point is a flange screwed to the floor with a short pipe in it. The wagon has a smaller short pipe that goes inside that one. This works well because, at need, you can lift the wagon off of the pivot to get at the casters or the underbelly.

I have a small collection of clips I have used over the years to demonstrate this scenic unit in the classroom and a few more recent ones. I have put them together in the video included here. I hope that this this helps some company out there put up a show that is a little easier or a little better.