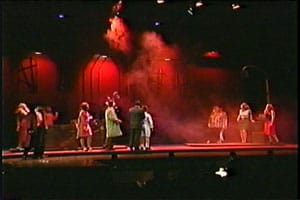 We produced  The Who’s Tommy at Plymouth State at a time when the norm for projections was still 35mm slide carousels and crossfaders.  The Broadway tour of this show had been touring with exactly that sort of setup about three years prior to this.

The video projections for this show ran off of two desktop computers, running a compiled DOS based program that I wrote specifically for the show.  It launched custom AutoDesk FLI and FLC animations in response to keyboard input.

All six projectors were mounted on wooden bases that could pan and tilt, and each had an operator that could point the projector at different focus points for different cues.  In this manner, we took advantage of both an upstage and a mid-stage cyclorama in the space, combined with rapidly moving scenic elements.

The result was a barrage of constantly changing visuals and settings, which was very appropriate for the show, and was generally an unheard of pace for spectacle at this  time for university productions.