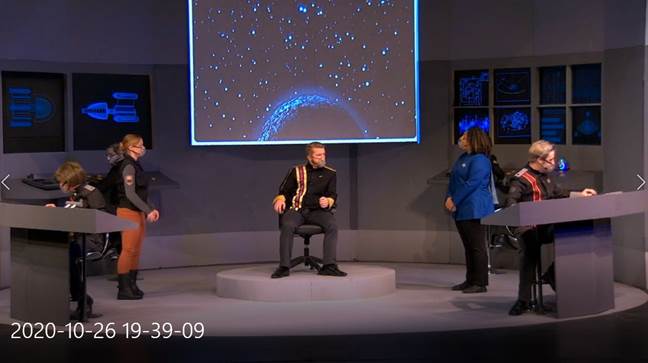 Throughout the spring and summer of 2020, the rules for putting up shows and for being a university kept evolving. In June, we diligently completed the set design and cost estimate for our planned production of Mamma Mia. We knew this might not happen in the fall. By July, there was no doubt: we needed a new plan.

The rules for Plymouth State Theatre:

At one point it was said, “We already have remote theatre. It’s called ‘television.'”

A few weeks before this, we had had a casual conversation about alternate theatre models, and audience building. “What if there were a venue, say in New York, where they built one set, and did weekly episodes, like a TV series?”

While working to solve the season problems, we were discussing various options. Live-streaming or recording shows was a given. At one point it was said, “We already have remote theatre. It’s called ‘television.'”

We listed off what we needed in a show:

The SilverStar Voyages became a significant part of the fall playwriting class. A team of two writers was assigned to each episode. The class as a whole worked towards a series premise, with the final premise being proposed by Aleksi Ellis. The class is taught by Doctor Paul Mroczka, who also serves as script editor and is directing two of the episodes. Five episodes total are scheduled, with some shooting still to happen as of this writing. Three of the five episodes are being directed by students Mikayla Caterino and Izzy Stafford.

Some of the set design images:

How do I watch these?

The full episodes can be accessed through the Silver Center for the Arts here: https://www.plymouth.edu/silver-center/2350-2/