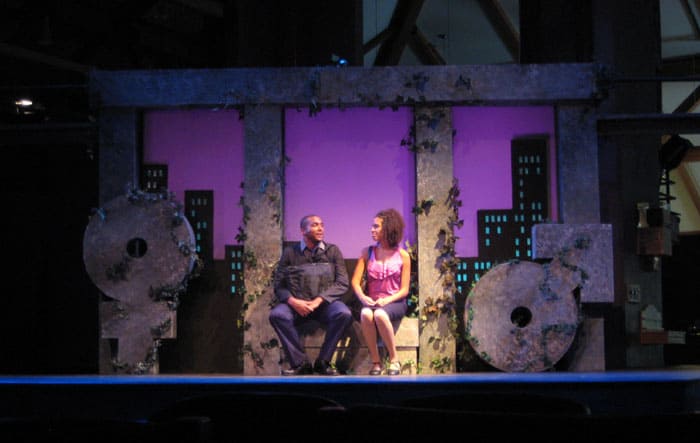 Low Tech Windows that Light Up

In 2010, I was the lighting designer on a production of Company by George Furth and Stephen Sondheim. The set designer was Marni Balint. The venue was our three-sided thrust space that behaves a bit like a black box.

Marni wanted distant city windows in the background of the scenery that were illuminated. The preliminary design included a catwalk/balcony that went right along the black back wall of the theatre.

In many situations, I would have recommended light boxes for this effect. A light box is a closed wooden box that is painted flat white inside. It has some kind of shaped holes in its facing that are usually covered with frost or paper or something translucent. Rear-projection screen Light boxes are great for simulating neon signs, applause signs, or cityscapes. They have been popular for decades. Long before projections became common in theatres, light boxes were a reliable way to make scenic elements light up brightly.

Marni really wanted the city to be as flat as possible. We considered some kind of projection effect. The back wall being discussed was flat black. We really wanted the feel of the light boxes, rather than that of a projected city.

Marni gave me the drawings of her ideal windows for the city, the same arrangement she used in her scenic model. I ordered two custom steel gobos based on those drawings: one for stage-left, and one for stage-right. I hung two elliposoidal spotlights with these gobos in them, and focused them on the back wall so that the windows landed very close to where Marni wanted them to be.

Marni then painted a rectangular window lined up exactly with each window being created by the gobo. She did this using metallic gold paint. The reflective gold paint provided a surface for each window that lit up brightly but was also an unusual surface. The gobos did not precisely line up with each window. They were maybe a quarter of an inch off here and there. This created sort of inverse drop-shadow effect. There was the illusion of an edge of an opening. Each window looked like it was a distinct opening cut into the back wall, with some sort of glowing light source behind it. The combination of metallic paint and custom gobo was unusual enough that it was impossible – mentally – to decipher what was actually creating the illusion. When we cannot figure out quickly how an illusion has been created, we move on to just accepting the illusion for what it looks like.