Brilliant Being was an experimental project.  It was created using a non-traditional collaborative process between a playwright, choreographer, composer, and myself as scenographer.     The visual design consisted primarily of projections mapped onto an all-white set.

The media was driven by a variety of technologies.   The core software used was Dataton Watchout.   Watchout provided the capacity to control a multitude of projectors smoothly, as well as allowing control of a huge amount of media, as well as the audio for the show.    We also integrated other, special software, that interacted with the performance, which was what this project really was about from a design standpoint. 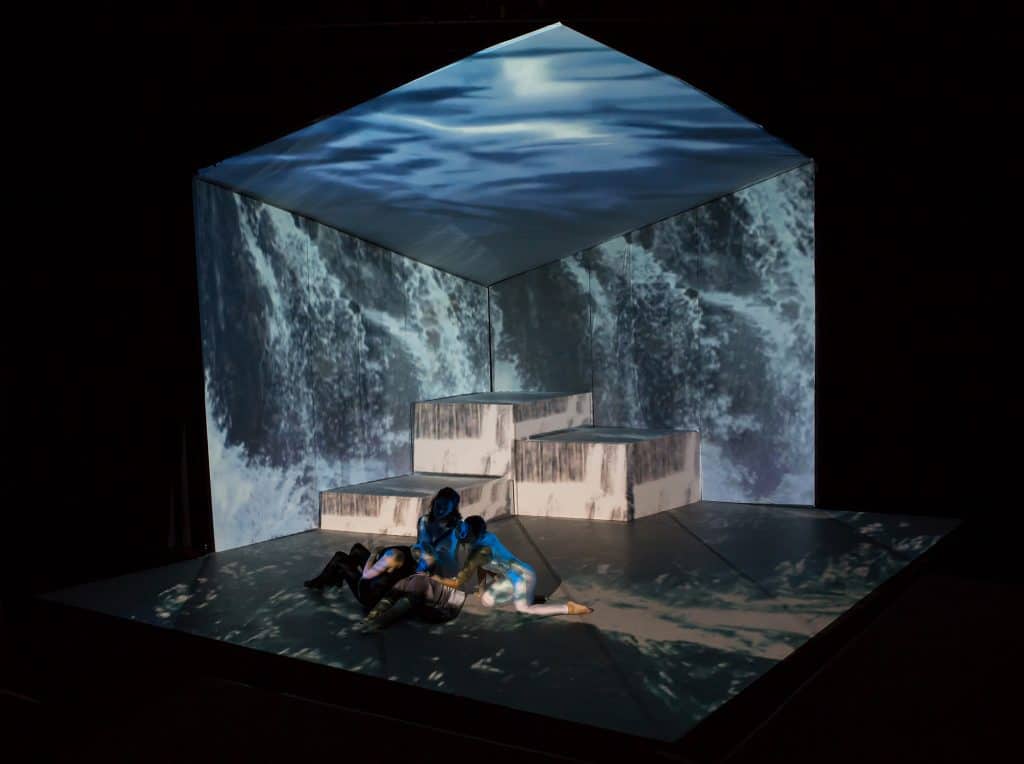 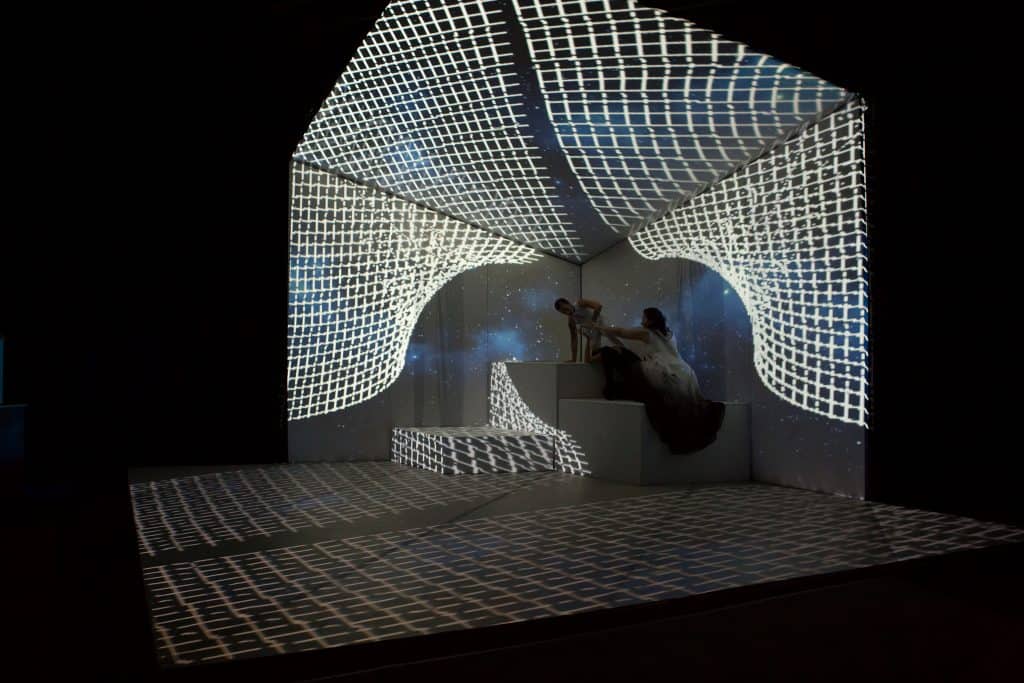 There were four computers networked together through a central hub.   One of them controlled the timing of the media, as well as the mapping of the media onto the set.   Two of them did nothing but play the actual media, splitting the task of feeding signals to the projectors between them.   The fourth computer provided various types of real-time media that responded immediately to the what the performers were doing.  This was handled with multiple systems.  One of them was original software that was controlled by the operator.   Grid textures, swarms of dots, water ripples, and other effects were generated and controlled using software that responded much like a video game.  The operator watched the performance (which included improv each performance), and simply moved the media with the dance. 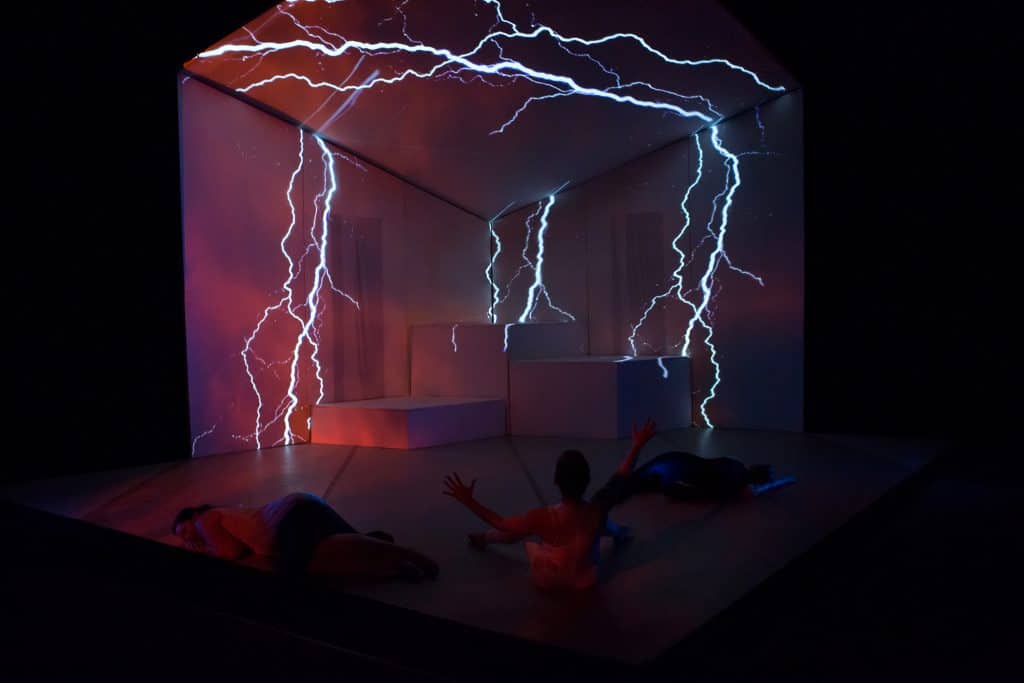 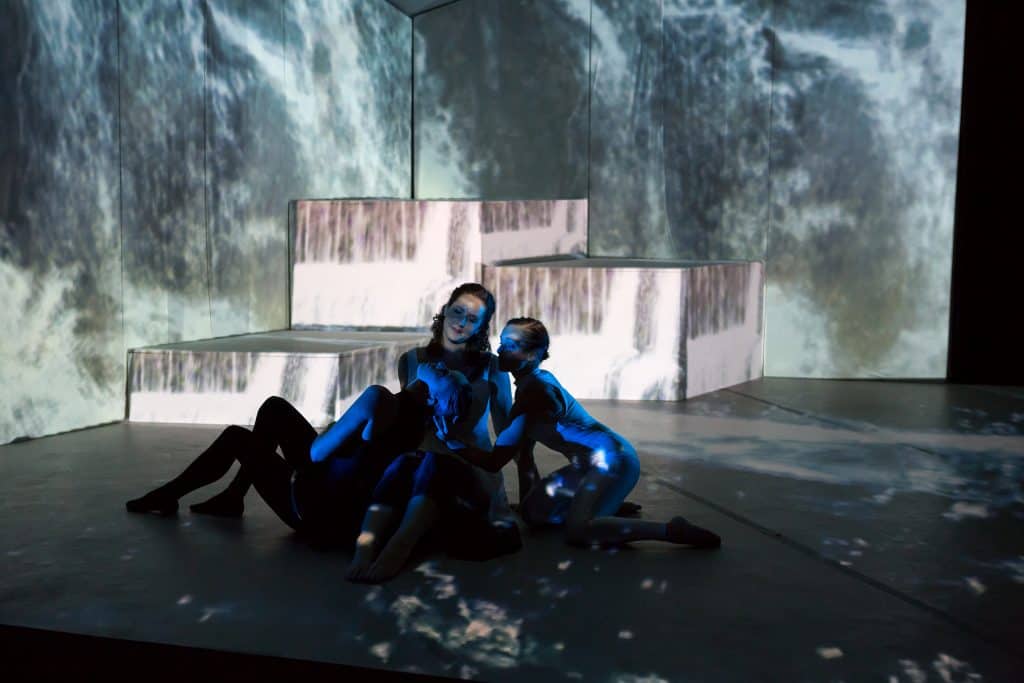 One type of software used generated visuals based on original art and fractal geometry, in response to audio input.   We placed a wireless microphone on one of the performers, and used her singing and vocalizations to generate visuals for the show.   This was predominantly a brilliant, glowing light on the horizon, sometimes seen through a forest, which brightened and intensified instantly in response to her singing.    The microphone signal was inputed directly into one of the computers involved in the system which generated the media, and then passed it on to the Watchout system. 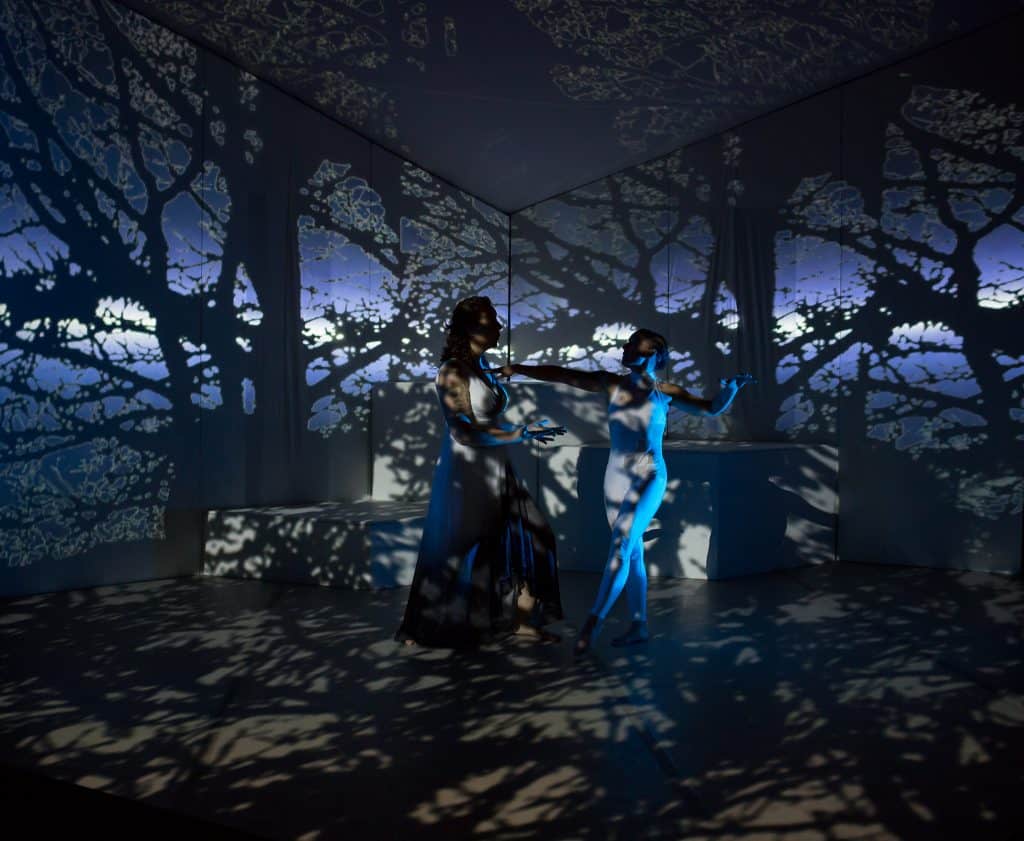 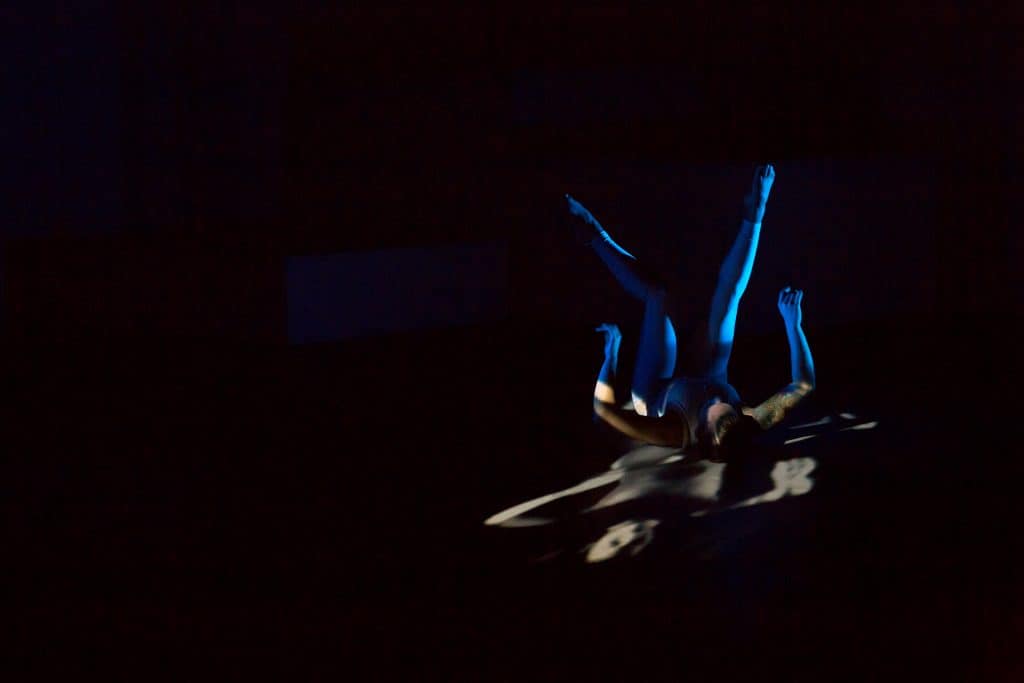 There was also an infrared camera in the mix.   We captured a live feed of one of the dancers at different times using this camera.   The camera was looking straight down at the performance space.  We fed this signal back into the system.  Because it was infrared, the floor came through as black, while she was all white.  We used chroma-key at times to isolate her image, and then put her image elsewhere in the space.  Above, we are projected her own image back onto her in the dark.   The image of herself created an aura that followed her anywhere she went.    Below, her image tumbles downward through the stars, projected on the ceiling of the set. 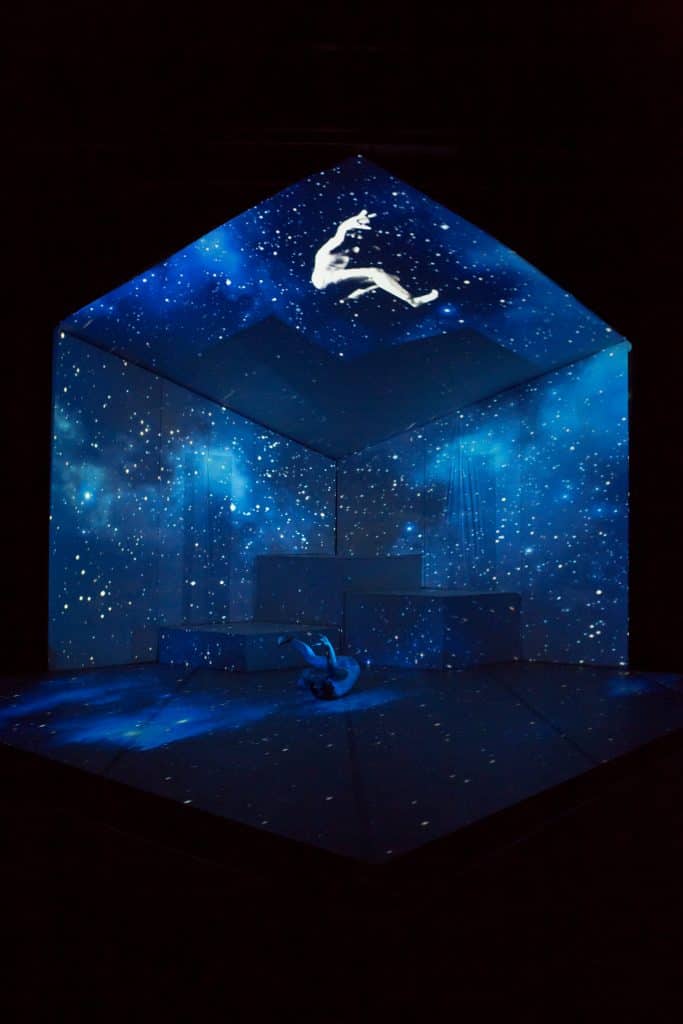 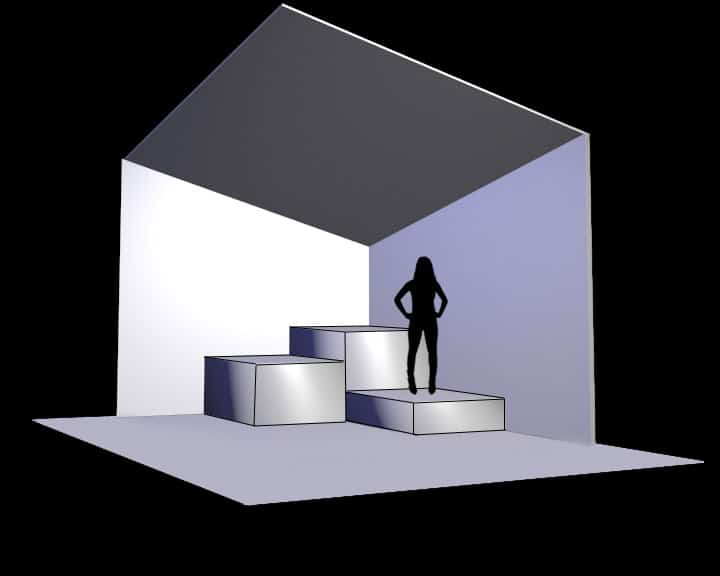 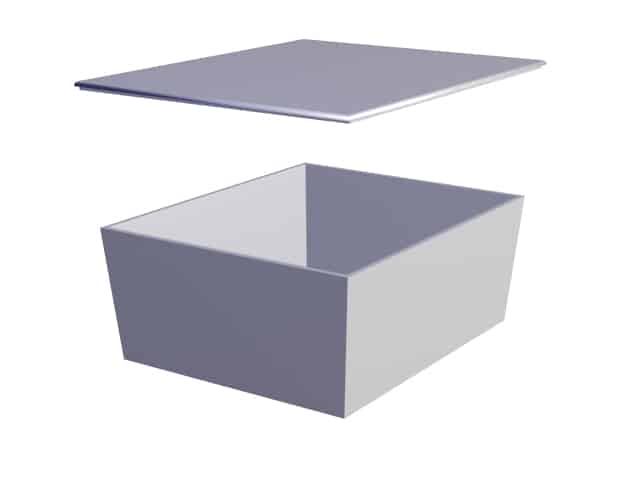 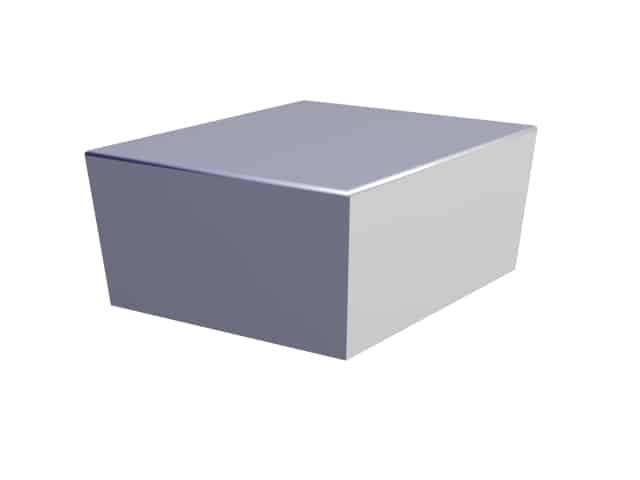 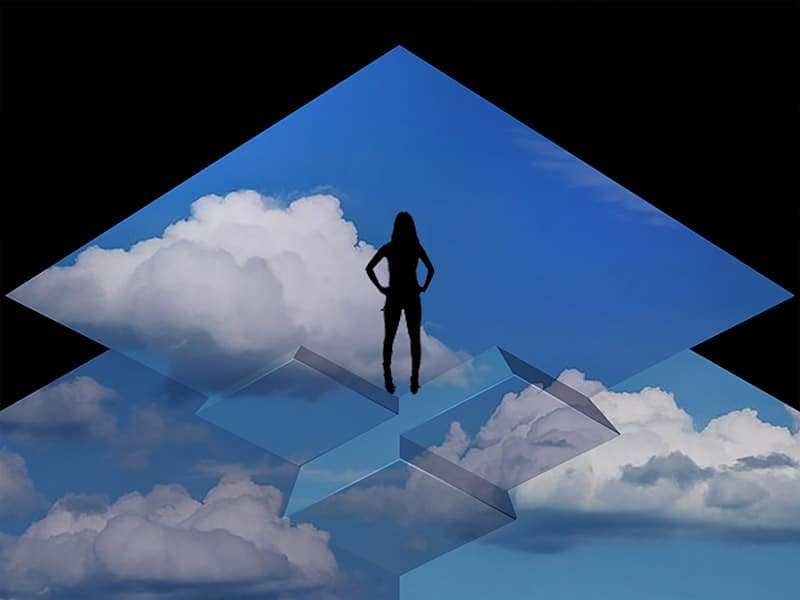 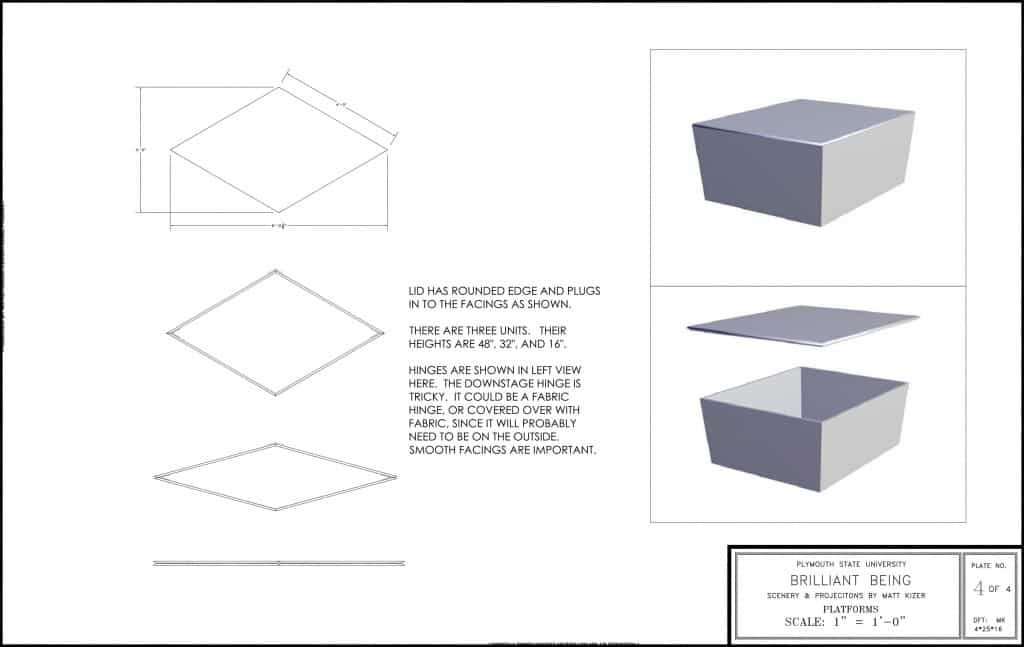